Dear friends, I’m sorry I have not been in touch recently. Many times I have sat down at my laptop to write an update but found it difficult to know what to say. Things at St James have not been going at all well and it has been a big worry for me, my husband and of course James and his family. I don’t know if James will ever be able to return to his previous role of doing most of what is involved in running the school and looking after the children who live there. And with the problem of no latrines at the school the immediate future looks a bit bleak at the moment.

Firstly, as you know James Mutyaba, the head teacher of St James has been very sick. After a severe bout of Malaria and a chest infection he contracted Toxoplasmosis, a horrible disease that affects the brain. James has got to the end of his six week prescription but is unfortunately still very weak, and we don’t know yet if he will ever have the strength be able to return to his full time job leading the school as he has been doing very wonderfully since 2008. In fact earlier this week he had a dizzy spell and collapsed injuring his head. Fortunately a scan has showed no permanent damage to his skull. His family are looking after him as well as they can but I only wish they had the services of an NHS like we do! Thank you to all of you who contributed to his prescription. It was wonderful how many of you donated for a days treatment at £28 and others for several days. We are all extremely grateful for your kindness and generosity.

Secondly, we were only able to take on a few children in February, the beginning of the Uganda school year, after a big tree fell on the school latrines demolishing them beyond repair. The remaining children have had to go to other schools but more likely they won’t be attending school at all! I have just sent the first instalment of money out to start building the new latrine block and hope by the end of this school year (November) I will manage to raise enough to complete the building so that the children of Nakakabala village can once again enjoy their school. The District Education Officer has been working very close with the family and has generously allowed the school to stay open during this time only because the children and staff were able to use ‘Gerry’s latrine’! He is very happy to know that the replacing of the latrines has now started. The latrines are to be sited on the edge of Lower Park, an area named after Lower Park Primary School here in Poynton.

With both these problems, it is fortunate that during my visit to St James December to January, we were able to form a School’s Management Committee to share all the responsibilities of running the school and to take charge when the need arises. Irene and Eric two of James six children are doing a sterling job as well as looking after their families and holding down their own jobs.

Thank you again for your love and support for St James. If you could possibly find a way of making a donation or an additional donation that would bring us a little closer to completing the latrine block so that the children can return to school this would be really wonderful. I would also lighten my worry load!

Slashing with a panga (machete) to clear the land where the latrines are to be sited. 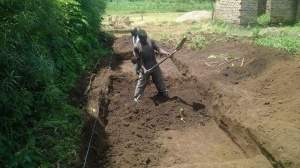 Digging must be hard work in the heat and they have a very big pit to dig, deeper than they are tall!