Innocent, who my family and friends helped through university, has been setting up a piggery business behind his home where I have been staying during most of this visit to Uganda. He given another four pigs from be and our friend Marie recently and now has eight. To save money Innocent buys up maize then has it milled seperating the posho with the bran. Then sells the posho that most people in Uganda eat every day of their lives, at a profit.

Every day he tends the pigs cleaning and feeding them without fail. I often watch him from my place in t he shade under the tree where I write my posts.

A few days ago he askedif I would like to clean out and feed the pigs and of course I said yes. His reply was to laugh and state that Mum Gerry couldn’t do that! Though I doubted myself that I could even climb over the high wall of the piggery I was determleined to give it a go. Each day after he had set the challenge he would ask if today was the day but I genuinly was too busy until the day I was being picked up by my ‘son’ Alex to go to visit his family in Kasozi village. Alex called to say he would be an hour late so I put my yesterdays clothes on and, to Inncents and his mum Judith’s amusement went out to the piggery all ready to do the job.

Climbing the home made ladder was the first challenge but it was when I had to climb over the wooden wall into the piggery that the difficulties started but I did it. Innocent handed me the broom and instructed me on how to brush the pigs faceas towards the back of the pen so it would drop out through the gaps. He was keeping a close eye on me commenting when I missed a bit! Judith and by now quite a few others were splitting their sides laughing at the spectacle of Mzungu in the pigsty! I’ll put quite a few photos on to show the fun I had…honest!

A sack full of piglets! 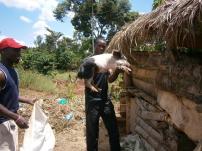 This Mzungu pig is called Norman after my husband. He is rather handsome!

The pigs were quite inquisative!

Had to make sure all the soiled areas were thorughly clean otherwise Master Innocent would have something to say!

Threatening those who were laughing at me!

It took me several attempts to decide which leg should go over first! 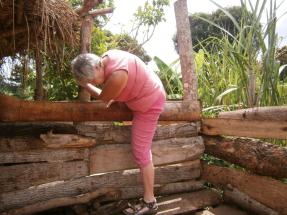 That wall was rather high!

It took me several attempts to decide which leg should go over first!

Once the decision was made Judith helped me place my foot on the first rung of the ladder as I couldnt see a thing!

Carefully does it! Landed! 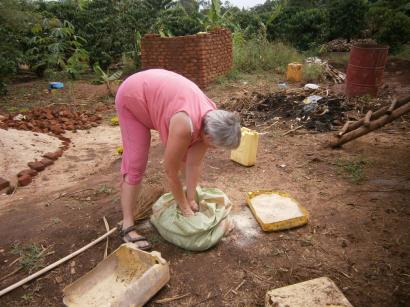 Then told my job wasnt over and that I had to prepare the maize bran for the pigs breakfast!

Mix it together as if your making pastry! 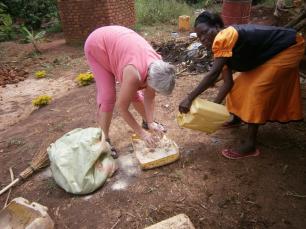 I wasnt denied the helping hand by Judith adding the water 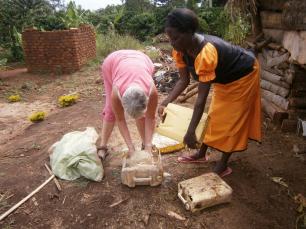 Alex thought it was hilarious!! 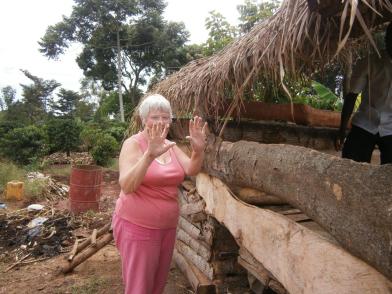 I was allowed a helping hand getting the food into the pigs!

2 thoughts on “No one should ever tell me I can’t do something. I love a challenge!”