It was sad leaving Nawanyago where I had been living very happily with Innocent and his mum Judith, but all good things come to an end! Before I left I gave our neighbours mosquito nets as their little girl Gift had been very poorly with Malaria. So many in Uganda still die of this preventable disease, its the biggest killer especially for those under five and pregnant women. I also gave one to Judith after enquiring if she had one. I had bought one for Innocent at the beginning of my stay. It takes so little money to save a persons, or even a whole family’s life! 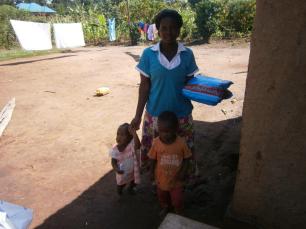 These two mosquito nets will help Lydia, Richard, Gester and Gifty from becoming very sick with Malaria and could even save their lives 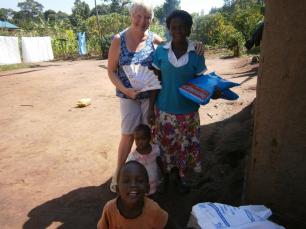 Innocent’s neighbours will sleep safer now. The two children were very sick with Malaria during my stay in October 2016.

Innocent’s neighbours had a brick maker some in to make mud bricks which they will fire in a home made kiln and then sell to supplement their income. I got a couple of photos and a video which I showed him and he found it all quite weird seeing himself on the screen but I had asked Innocent to get his permission beforehand if it was OK. Not sure he really understood until I showed him!

The brick maker. The soil here is just right for making bricks. 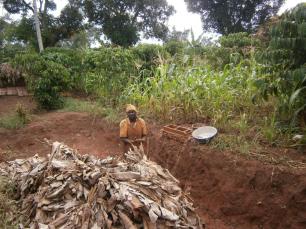 I spent a while chatting to the pigs, as you do and took some great photos, especially of my ‘husband’. He is becoming quite friendly! Also photos of two others named after Anna and Holly who gave Innocent the pigs. Innocent has written a beautiful letter to you and his other sponsor Ruth in the UK, which I will be happy to deliver as soon as I get home. You have made such a difference to his life. Thank you!.

Holly liked to be centre stage! 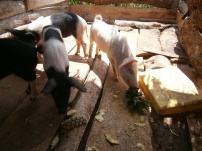 I have been very happy and comfortable here and look forward to coming again next year.