1st January 2016 I am sat on the steps outside my friends house with a cool, or maybe a better description would be less warm, breeze off the Nile in Jinja. The family have gone to church and will probably be a few hours as the services in Uganda go on a long time. I was woken up this morning by a gentle tap on the bedroom door. It was Godfrey who placed beside me my breakfast – tea, pawpaw and Christmas cake! I smiled remembering the first time I had pawpaw. I ate too much of it and was on the loo for 24 hours! James told me they use it here for sufferers of constipation!

We had a very enjoyable party in the village centre last night to see in the Ugandan New Year but unfortunately I developed an enormous headache and had to come home before we got to celebrate the UK New Year three hours later. I had done so when I was here last year but only made it to 2am Ug time this year. I just needed to get my head down, and before my family and friends make any comment, I can inform you I only had one Nile Beer and probably a litre of water! I was happy that Godfrey returned to the party and saw in the UK New Year without me. I didn’t hear them all come home at 4 so I must have needed the sleep!

I moved into Godfrey’s home yesterday afternoon along with James who I had persuaded to come from Nakakabala to see in the New Year with us. He doesn’t like to leave the school but had got Grace, a very reliable young man, past pupil of St James, to step into his shoes for just one night. I had told James it would be the last opportunity for us to celebrate New Year together as I doubt very much if I will return to Uganda over the Christmas period again. I miss not having the children at school and more important I miss my family more at this time of the year – I always want to be in both place at once!! Miriam had one gift to cheer me up, Ugandan tea and a slice of Christmas cake! I had left home before ours was cut!

Back to the party. I was very surprised that Miriam, Amasa and Abi were not at home when we arrived but Godfrey explained that they had gone to the grandmothers place to help her but would be back shortly. He also told me that his friends who usually help with the preparation for the party had gone to the burial of a close colleague and that he was doing all the catering! This is typical of Godfrey. He had been away working for two days travelling many hundreds of kilometres, then come and picked me and James up before coming home only to go straight into cooking! The man who looks after the compound walked past me as I was drinking tea, with six live chickens hanging from his hands. I stayed where I was until I knew the ‘deed’ had been done! I’m not really squeamish but would prefer not to actually watch. I made myself do so a few years ago as I believed if we are happy to eat meat we should know where it comes from. Once is enough though!

As the men de-feathered and gutted the birds I offered to prepare the vegetables. “Are you sure?” Godfrey asked with a doubtful look on his face. Mzungu (white people) pay others to do the cooking in Uganda which is very nice especially when it is so hot but I couldn’t sit with my legs up, relaxing and reading my book while the three men worked their socks off – well not socks as they were barefooted except for the feathers that were creating slippers for their feet! 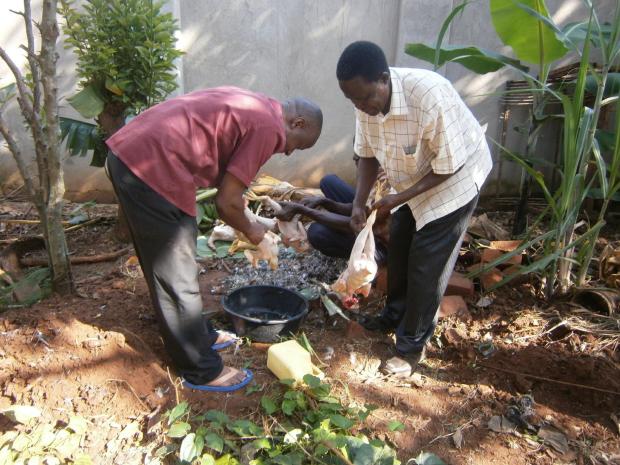 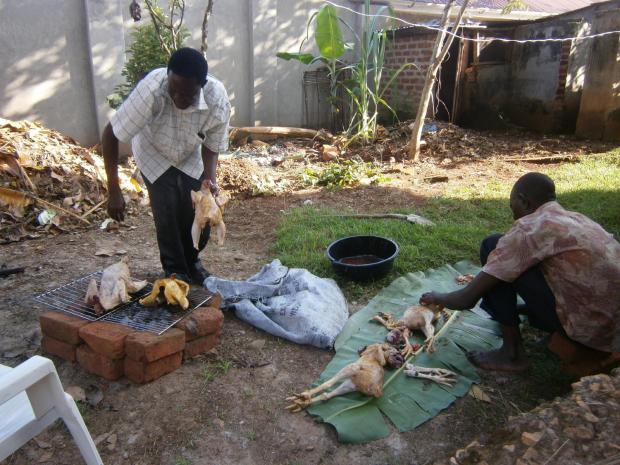 Not for the faint-hearted

Almost ready. James is an expert!

I almost regretted having offered to help when the pile of onions, carrots and green peppers arrived and with no peeler or grater available my fingers certainly had a work out, though I must admit the small knife was razor sharp! Happy to say no slices of fingers were added to the coleslaw though I did tease Abi that there was when she arrived home and came to help!

Godfrey ‘assisting’ me with the vegetables!

I was grateful for Abi’s help with the four bulbs of garlic!

At 10 o’clock all the food, crockery, and anything that was needed for the party was piled into the car with Abi crouching beside it in the boot. The track to the venue was very rutted but Godfrey seemed to know every pot hole!

‘Welcome back’ was the greeting I received when we arrived at the village hall. I recognised most of the faces and they said they were excited that I was back as they had ‘so enjoyed all the fun last year’. That’s when I had been in top form dancing for hours, and teaching them Auld Lang Syne when it came to celebrating the UK New Year, in the street outside under a moonlit sky. I was already thinking I was not going to be able to keep up with their expectations this year as my energy levels were still very low but I was happy to be amongst these friends once again.

The meal was served almost immediately. I couldn’t believe my eyes when half a chicken was put in front of me! We also had a plate of the coleslaw and cooked mixed vegetables that I had prepared but, of course no utensils. I usually carry a set of them with me but not tonight so I just dived in! I love the smiles when appreciative smiles when local people see me eating with my fingers. OK I make a right mess but so do they and someone is always ready with a slab of soap, a basin and jerry-can of water as they are before you start to eat.

Godfrey got us all outside for the countdown as he knew we would be able to see many fireworks looking down towards all the Nile resorts in the distance. I just love standing outside in Uganda and last night the moon was orange and the sky sparkled bright with so many starts. No light pollution here!

Back inside for the dancing and within minutes everyone present was on their feet and although I felt tired the beat of the African rhythm gave me energy to enjoy it fully until suddenly all went dark, very dark as all the lights in the whole of the district went out as is often the case when you are wanting power to enjoy yourself! Even with a hydro-power station just down the road and another not far upriver power-cuts are frequent in Uganda.

To wait for the power to return the chairman of this community group gave a speech, a veeeeeeeery long speech all to do with being indecisive. I recognised me in a lot of what he was saying but found myself falling asleep as he and others continued to offer their worldly advice. I was woken from my dreams by Godfrey asking their ‘special guests’ to say a few words indicating that I would be first. I had to think quickly and make a decision!! The Chairman’s speech gave me a lead as I told them about the decision I made to come out to Uganda for a month way back in July 2002 at the advice of my husband Norman who said I should come even if I hated it so that I would ‘get it out of my system’. Somehow I don’t think in worked, I have been coming annually since! I also thanked them for having me especially Godfrey and his family who then took the opportunity to inform the guest who had help prepare their meal – got a standing ovation!!! The man who spoke before me told us it was his wedding anniversary on 1st January and that he and his wife had got married in 1972 ‘long before many of you were even born’. So I concluded my words telling them that I too had got married in 1972 and got another round of applause!

James started his speech with his favourite saying ‘If I a not grateful am a great fool’!

By the time the power came on again my head was pounding and I was ready to lay it down so Godfrey took me back to his place and as I mentioned he returned to the party to see the UK New Year in on my behalf, though he told me this morning it wasn’t quite the same as last year as I wasn’t there to sing Auld Lang Syne with them!