Tuesday was a day of memories mostly good but a little sad too. Alex picked Gem and I up to go and visit his family in Kasozi but I asked him if we could go to Kamuli on the way to do some shopping and t go and look at Maria’s Care where I had first lived and worked in Uganda from 2002 to 2007. It had been a home for orphaned and destitute children. Also I have been keeping in touch with Godfrey one of the ‘old boys’ who became a teacher at the school, in fact teacher to Alex and two of his brothers. Godfrey is also a church leader at the Kamuli Baptist Church where I met him the first time I visited the church at Christmas 2009 where Maria Maw is still very much a part of the church community as many of her children and their offspring still attend. Godfrey, along with Alex, John Baptist and many other ‘children of Maria’ still think of Maria’s Care as their home but it is a very different place now.

Maria’s Care with Godfrey and Alex

However each year, on the day of Maria’s death they walk into Maria’s Care and hold a memorial service for her just as they did the day of her funeral. I had informed Alex and John when Maria died and they gathered up as many ‘old boys and girls’ as they could and held a service at the same time as we were saying goodbye to Maria in Ingleton, Yorkshire. Godfrey actually phoned me from Uganda when Norman and I were at the home of Ruth, one of Maria’s daughters, after the funeral. Well he joined us for our visit to MC.

The last time I turned up to visit Maria’s Care I did not get a nice welcome so this time as soon as I saw the small gate was open I got out of our vehicle and with a determined mind knocked on the gate and entered. There were a few workman painting and renovating but otherwise it was very quiet. Then a man came out of the office and gave me and Gem, who had followed close behind a warm welcome. His name is Dan and he introduced himself as the Director and Head Teacher of the school. By this time Alex had driven the vehicle into the compound and he, Godfrey and Mike, one of Alex’s brothers had joined us. Alex asked if we could look around and surprisingly Dan told us to be free to go anywhere.

So we spent an hour going down ‘memory lane’ both of theirs and of mine. Of course there was some sad talk of what has happened to their wonderful home but mostly it was very positive, remembering the good times. Much has changed in particular the hall which used to be full of colour, now very plain and gloomy BUT the dedication to Maria Maw for the opening of Maria’s Care in 1996 is still there. We had another nice surprise when we went in the office to sign the obligatory guest book too as there was Maria’s photo hanging where it always had been!

Godfrey, Alex and Gem in the hall 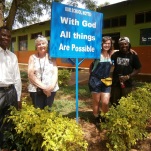 One of Maria’s favourite sayings

So it turned out to be a much happier return to MC and Gem has asked if she can return once the children are back at school and Dan says its OK! So once again a member of the Maw family will be bringing fun and laughter to the school. As we were leaving Alex had the idea to invite Godfrey to join us in the visit to his village which Godfrey happily accepted.

Gem did a little shopping – old socks to make juggling balls and electric piping for hoolahoops. The children are going to have some fun with Gem! 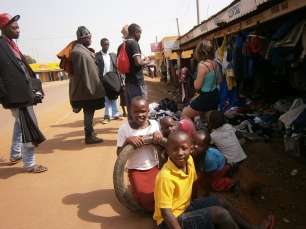 Kamuli locals must have thought she had cold feet

Then we headed towards the village, the vehicle full of excited chatter between Alex driving and Godfrey sitting in the very back seat. Often they would stop talking for a second and tell Hannah (Alex’s fiancé), Gem and I what they were talking about and of course it was always about Maria and their life with her at Maria’s Care. The last time Godfrey had been to Alex’s village was in 2003 when he came with Alex and Maria during her last visit to Uganda (I think).

The road is just the usual mud road with many big potholes that Alex negotiated very skilfully where others often fall by the wayside. We came across a man whose motorbike was overloaded with heavy sacks of grain and the whole lot had ended up in the ditch. With no hesitation Alex pulled up and jumped out to help and with Godfrey and Mike also assisting the man and his load were righted and helped on its way. Gem was itching to help too but to her disappointment by the time she got out of the van it was all over!

When we arrived Alex’s mum rushed out of the kitchen and gave me a big hug of welcome. I then introduced Gem who first of all got a respectful hand shake but when I told Mum she was Maria Maw’s granddaughter Gem got an excited hug too. Then of course with Godfrey appearing out of the van too Mum got another surprise. She returned to her kitchen while we sat for a while in her neat little living room each member of the family coming in to greet us. Hannah and I don’t like to be sat for too long and Gem was likewise so we ventured out with the boys to be shown around the garden. Mum Monica is doing very well now and looks after her youngest son Emma and the older brothers when they come to visit, and of course Paul who is still at school and awaiting his O Level results. After looking around her well cultivated land and admiring the 9 two-week old piglets (I had to check Gem’s pockets before we came back!!) we were served with a delicious meal mostly of the local veg, a little meat and of course the g-nut sauce made with nuts from the garden. Gem loves the food already! 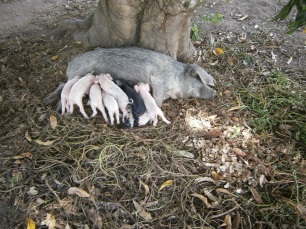 Once the plates had been cleared away mum disappeared into her room and came out carrying a photo album which she excitedly showed to Alex. I don’t think it had seen the light of day for a long time and in all the time I have been visiting the family I have never been shown it. She must have been waiting for a special occasion like this one – Gem! The album contained photos of her husband Christopher who Maria gave a job to at MC and also ones of a much younger Alex, Robert and disabled step-brother Godfrey, when they had been looked after by Maria, which caused a lot of laughter! Godfrey and Alex spent another while sharing more tales of those in the photos before we had to set off for home.

Just before leaving we were visited by a local man who had had more than a skin full of the local brew. He gave us all more than a good few minutes of entertainment though initially I really tried not to laugh. He kept asking Gem and I to go and meet his mum which invitation of course we declined but then shortly after leaving Alex’s home Alex turns the vehicle into another homestead and it is that of the drunk man!! Hannah, Gem and I at first though ‘Oh no!’ But when we saw his excitement and that of his family we thought ‘Why not!’ As Gem commented at the time, she now know what it is like to be a celebrity! Mats were brought out from several tiny homes and many photos were taken of us all surrounded by joyous people of all ages. Even the Local Councillor was called and she sat by me looking very proud. The drunk man’s mother was at first bustling around us but when she saw the camera she disappeared into her home and didn’t seem to want to join us but then reappeared in her best Gomez and was happy to be in the photos!

Alex’s neighbours. Drinking man in yellow on the left!

It was a great day for everyone reminiscing. I always enjoy my regular visits to Alex’s family and this one had an extra ingredient that made it even more special.