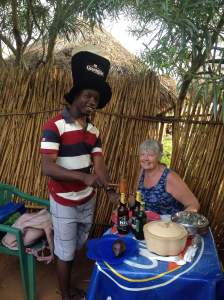 My farewell supper and Nile Beer with Innocent at Mirembe Bar. The food was made at St James and we took it to the bar! 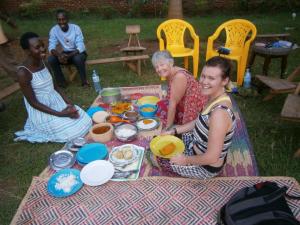 My last supper with James, Innocent, Gem and my two helpers Ruth and Grace who were wearing the clothes you donated

It is such a long drag to Entebbe airport from St James mainly because of the massive traffic jams in and around Kampala that can never be avoided so I always dread my journeys to and from the airport but on Saturday I had six wonderful young friends who chose to keep me company. Alex and his fiance Hannah picked me up from St James at 8 am and we were joined by two of his brothers Bosco and Paul, their step-broher Godfrey and of course Gem was with us. So that I lessended the risk of missing my flight I suggested we get as close to the airport as possible and spend a few hours relaxing by the pool of the Lake Victoria Hotel actually in Entebbe. I had had another sleepless night and felt quite poorly so being able to chill out, quite literally, and have some fun was just what I needed. It was so wonderful to dive into the water after sitting for over six hours in the hot vehicle! It was lovely to spend the extra time with some of my lovely Uganda family too as they look after their English ‘MumG’ very well!

The hours were spent swimming, playing ball, sharing stories and lots of laughs. I was so glad to have the opportunity both to relax and spend the extra time with them all though I was conscious of the fact they had the long congested journey back home afterwards! 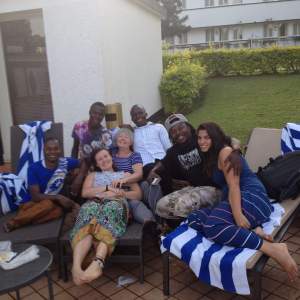 Just before we were ready to leave Gem announced that ‘the time was right’, and asked me to sit down as I was forever nervously readjusting my flight bags! Everyone gathered round me then Gem made a little speech and handed me the most beautiful homemade card which everyone had put a message in. Every message was heartfelt and as I read through my tears bubbled over. Alex came behind me and gave me one of his loveable hugs as did everyone else which made the waters flow even faster BUT I wouldn’t have changed anything. I love these young people and am so proud of the progress the boys have made over the years. My family and friends have helped them with their education but they are the ones who have made things happen by their hard work. Alex has his small tour company, Bosco is now training to be a nurse and Paul, the youngest, is still surprising us with his latest achievement at gaining a Grade 2 in his O Levels and wishes to go on to do science A Levels and to become a doctor!

Gem had also made me a special case for my specs that I am always losing, with messages on it that are to remind me that I am loved and I am worthwhile because she realises I often lack confidence in myself and what I am trying to achieve. THANK YOU GEM, it is beautiful and beside me as I type! 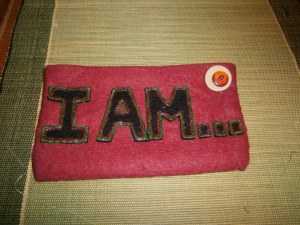 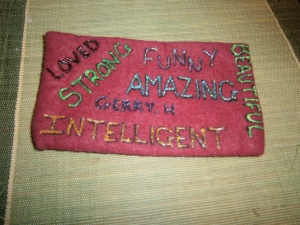 Paul had never been to an airport before and Bosco and Godfrey only on school trips years ago so it was excitement all round though tinged with sadness from me and them as I know they care for me a lot. The queues for check-in are usually so long and slow but they must have realised I needed a break as I went quickly from saying goodbye to my friends to the departure cafe, no problems at all. Amazing! I was a bit annoyed though when I was not allowed to take my bottle of water which had been bought in the cafe and was still sealed, through to the gate but understood when a fellow passenger informed me that while I had been away for five weeks there had been lots of worrying discoveries in Belgium to do with the Paris bombings, and I was flying Brussels Airlines! 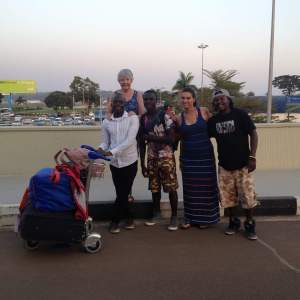 Bosco, Paul, Hannah and Alex with me at Entebbe Airport

Miraculously once we had had our stop-over in Rwanda I fell asleep for five hours which is unheard of as I normally spend my flights wondering about the plane while everyone else sleeps! By the time I arrived on my connecting from Brussels to Manchester I was feeling tired but quite recovered from Friday’s sleepless night, and delighted not only to see my darling hubby but also our daughter Sara waiting for me. She looked so good after recovering from major back surgery. I had missed their loving hugs as I always do when I am away! BUT that won’t stop me returning to Uganda again in the not too distant future – still lots to do!

I have several news blogs to catch up on but my next newsletter will contain some very important information so please watch out for it!

Thank you all once again for your interest and support for St James!