Many benefitted from your generosity but I didn’t always get photos but another family who were certainly happy to recieve the gifts were John Baptist, his wife Jennifer and their little son Francis. I have known John Baptist since my time working at Maria’s Care Children’s Home. In fact Vernon Infant School paid for him and his sister to have a mud home built for them as Veronica was too old to live at MC. The house has long gone and now he has a small incomplete brick house built by the charity but he and his family are very hard up. As you see by the photos John and his wife Jennifer were very excited to receive the clothes. Though Francis was not quite as keen to try these strange things on!

Smiles say it all! Mum Jennifer and Dad John Baptist were so excited with the new clothes

Not sure that Francis agreed though!

Dad wanted to try others on his son and chose this red and white striped suit as he is a Manchester United fan!

I haven’t lost my touch – Round and round the garden like a teddy bear, one step two step and tickly under there! I got a smile and a look of amazement from mum and dad!

Whole family kitted out though I had to persuade Jenniefer that my friend Annicks trainers were too small for her!s 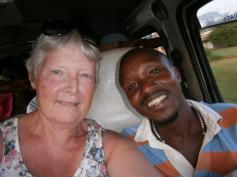 Dad John and I in the front seat of the suicide bus that took us back to Innocents for the weekend. They are cousins but closer than brothers