Most of yesterday was spent in Jinja town with Alex trying to cash my Moneygrams as I had few Ugandan Shillings left from my last visit. It is always slow and over complicated to do any transaction here in Uganda but yesterday was even worse as the systems in two of the banks had gone down and you’re only told of this after you have filled in the forms and waited in the queues for what seemed hours! Eventually I got the money and gave Paul, who had travelled with us, his school fees to pay this terms bill and money to buy his ‘requirements’ for the next ten weeks. His list ranges from shoes to washing soap and loo rolls – they have to provide many basic items. He went off to sort his shopping and Alex and I headed to the supermarket to buy my ‘essentials’ for the stay with Innocent – water (lots!), tea, rice, cooking oil, matches, loo rolls, soap x 2 one for my personal use the other for washing my clothes, curry powder, salt, sugar (for Innocent!!), etc. Alex got my Calor gas cylinder refilled so that I can at least boil water for tea without having to light a wood or charcoal fire!

Next on my list was the MTN mobile phone company as I had decided to try out a Wi-Fi modem to communicate with you all but needed to check out that it would work far away from Jinja town! Fingers crossed I have been advised right. The proof will be in the pudding – you will know I was wrong if you don’t hear from me once I get to Innocent’s place!

All day Alex was on the phone chasing Hannah’s luggage up that should have been delivered earlier in the morning. The man bringing it reported that he hadn’t left 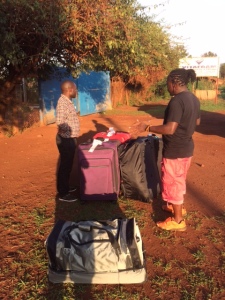 Kampala because he had a flat tyre, didn’t have a spare and, worrying of all had decided to bring the six cases (one’s still missing!) to Jinja by public transport! Any of you who know Africa and other third world countries will know that these vehicles are not the most reliable!! Eventually late in the afternoon Alex got a call saying the man was stood at the side of the road near to the Nile crossing with the cases! Hannah was relieved to see her belongings but still awaits the seventh bag!

Selah still continues to be wide awake and night and fast asleep during the day so we are all doing a little to help Hannah out. I’m doing the least but this morning I had her for a ‘shift’ and as the sun was shining but the heat hadn’t built up we sat outside watching Uncle Paul do his washing in preparation for the start of school tomorrow and got to know a very friendly cockerel who kept following as I walked Selah around! 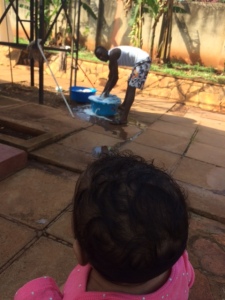 Selah enjoyed being outside watching his Uncle Paul doing his washing!

The house cockerel kept Selah’s attention too as it scurried around us!