Mat-making to earn extra money to feed her family 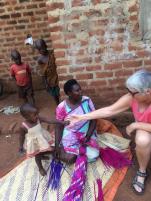 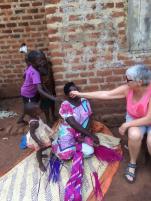 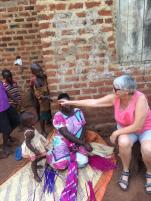 my hand is shaken a lot her in Uganda 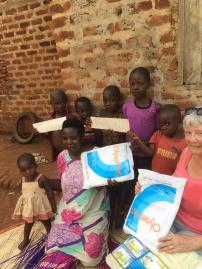 This family say thank you Hyhana and Tehya for their mosquito net!

Dear friends, I will gradually bring you up to date with the posts I wrote while in Uganda! So here goes with the first one ‘There will never be enough mosquito nets – help!’

When I decided that my main project this year was to provide as many people as possible in the local community with mosquito nets, because the biggest killer of young children and mums-to-be is still Malaria here in Uganda, I had not envisaged the demand and desperate need there is for them. I had been told that the Ugandan Government had recently provided some nets but no where near enough, sometimes only one per family of nine!

My team Innocent, Fazie and John, have been out twice spending all day going around the tiny villages giving out mosquito nets from dawn till dusk and sometimes after dark. We were offered the ‘loan’ of a car by a good friend of Innocents and although I was not keen to take on the role of driver, needs must as none of the others drive! Fazie was the one who knew where all the tiny homes were ‘hidden’ in the ‘bush’ and proceeded to direct me – “Slow Madam slow, next turning  on the right”. (There is a mosquito sitting on my laptop screen!) I don’t see any track whatsoever but they say go on so I slowly push through the bushes trying to avoid the goats, chickens, cows and toddlers that appear. I don’t think I got above 10-15 kph! I have been driving for almost 50 years and wasn’t keen to use an automatic but once I had had a lesson by its owner who was very complimentary and said I was a quick learner, I am very grateful because the tracks I have been driving one have been narrow (very!), deeply rutted and almost non-existant in places!

Thank you to all of you who have donated a net or more – one lady donated 20! They are going to save many lives! Such a simple gift but with serious consequences. Please spread the word of the need for more and more nets and I will try my very best to meet the needs of as many families as possible during my short stay. £5 that’s all it takes. x

The photos are just a few of the nets we delivered!

At the end of each day we had to park the car in front of the home of a local policeman as it would have been ‘at risk’ outside Innocent’s home because there is no boundary fence. The policeman’s home had no boundary fence either but was obviously thought to be more secure! So we would leave the car and walk up to Innocent’s bar Wallet Pub where he had left his motorbike and return home on that.

When we went to collect the car next morning I was just about to open the door when a voice from inside the house stated ‘flat tyre’! I was not surprised at this as the routes through the bush had been particularly uneven to say the least! The boys knew exactly what to do and directed me to a row of simple houses at the trading centre. They spoke to some man or other and within minutes a big machine was bought out to re-inflate saying it would be fine for the next days deliveries. Who am I to argue, I’m just a Mzungu on one long delightful adventure! They were correct the tyre did last us the next day and the owner has promised to have it fixed before the following day when we would be delivering in another district much further away from here.

Thanks Debbie. This young man is profoundly deaf 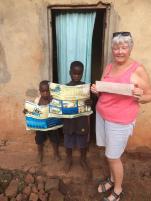 Thanks Pam and John

Thanks Liz and Bill

Thanks Liz and Bill 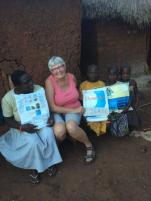 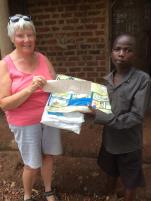 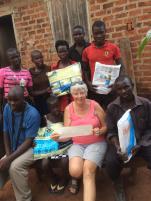 But the other front tyre has no tread at all! 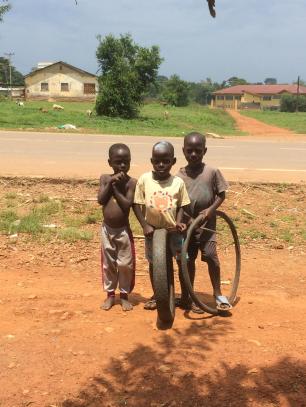 The tyres these children were playing with were as good or even better than the ones on the car! 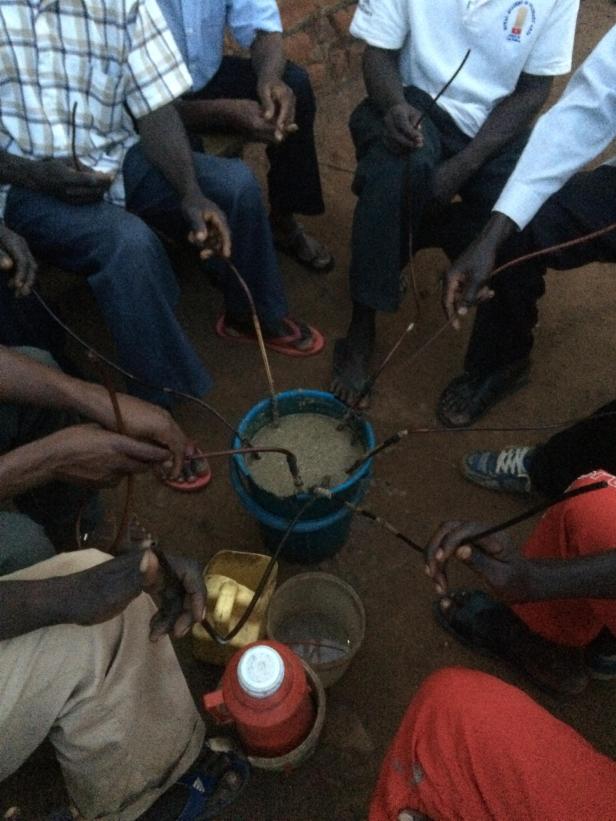 I had a sip of this years ago and never again!