During the big storms soon after I came to Uganda much of the roof of four of the classrooms at Brain Trust Nursery and Primary School were blown off leaving the children exposed to the scorching sun and rain. I reported this to Poynton Rotary Club who had already been generous with a donation for mosquito nets, hoping they would help out again and was so pleased when they agreed.

As soon as I received the money Innocent my Project Manager went to work searching out the best value materials, in fact the bricks were made and baked by a family in their own garden, just near Innocents home and were just the right amount so he bought them. Innocent always tries to support the local community by sourcing as much as locally. Because most of the children have the day off today only leaving the exam candidates, the building work could commence and I’m told will be completed before lessons on Monday!

Charles the head teacher supervises the builders and teaches at the same time!

Looking down towards the kitchen and other classrooms 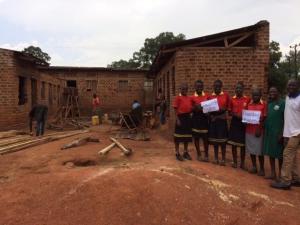 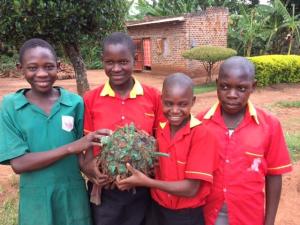 A netball made by covering a balloon with plastic bags and string! It even bounced!

The boys say Asante sana, thank you too! 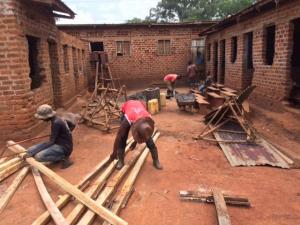 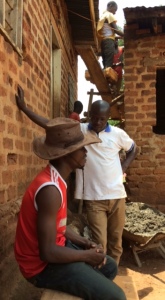 Alex from home and his friend missed out on the other photos!

The work goes on!

The students were sent to the borehole for more water for the cement, helping to repair  their own classrooms! Even Charles is acting labourer and teacher today

Man on the roof! 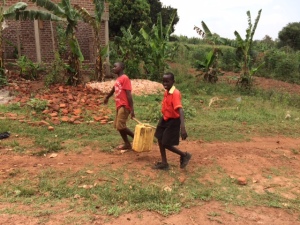 It’s quite a hike to the borehole and they had been collecting water for the cement since school started!