I must apologise for the delay in delivering your kindly donated mosquito nets, except for the first few early last week. Searching out safe reliable transport has been a big problem. I just don’t seem to have much luck with hiring a safe and reliable vehicle, as those of you who have been following me over the years have been witness to! Remember the two last year – the one with the dead bear on the dashboard whose owner was so proud of his car but didn’t inform me it’s ignition didn’t work and various other crucial elements were lacking, and we got stuck in shallow flood water where other vehicles of similar type had coped! We got stranded miles out and there was little shade! Fortunately I had taken plenty of water and emergency rations for us all! I did get the cooling benefit of a paddle with the local cows though!

That car apparently got scrapped as it wasn’t the first time it had let people down!

Then the small black one that arrived to replace it with a flat battery and an even worse ignition problem so I was having to be push started every morning! This car had its spare tyre stolen when it was parked outside my bedroom window one night so we had to go to Kamuli, the nearest town, to buy another and guess what, unknowingly we bought the stolen tyre back!! I did treat the owner to a genuine new car battery though!

This year we have gone through two vehicles already! The same black car, with my financial help, was returned with the promise from its owner that all problems were solved. But oh dear, it was in such a dangerous condition I never even got behind the wheel! I was so annoyed and upset to be taken advantage of like this but honesty is lacking in certain quarters of this society if there is money involved!

The black car was replaced with a big Land Cruiser which, as you read about in a previous blog, was even more dangerous and could have cost me and my young friends their lives!

I suppose part of the problem is my ignorance of cars but also that I trust too easily! I don’t think either will change but there are certain people who are now black listed when it comes to trusting, that’s for certain!

But, I haven’t given up yet and I’m looking forward to driving a small pick-up for the first time!

Today my very good and trustworthy friend Godfrey is bringing his pickup from Jinja for me to borrow for the rest of my stay so tomorrow, Sunday, we can start delivering the nets around Nawanyago.

Then the following weekend Innocent will accompany as I drive the pickup to Kasozi, an outlying village and the home of my Ugandan family, the family of seven brothers some of whom you met on Monday, Mike, Bosco and Paul. Wish us luck! 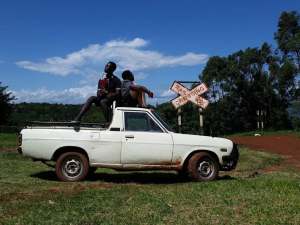 My next carriage, minus the posing princes on the top, ha ha!