The Ugandan people are very proud of their heritage, love to fly their flag and sing the Ugandan National Anthem. Learning all about the Ugandan flag is part of their Year 4/5 curriculum too. The children also like to draw and ‘shade’ at every opportunity. So with all these things in mind I decided we would make Ugandan flags but with the addition we we learn about the British Union Flag.

I had bought the school the two flags as a gift and they were displayed, between gusts of wind that blew them over the back of the board or even out of the hall completely! 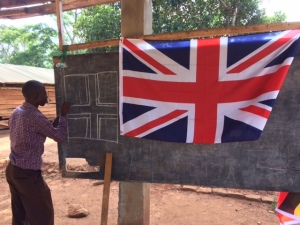 I was pleased when the class teacher was very keen on the idea too and even took over from me as he saw me struggling to draw on the blackboard. My carpal tunnel is getting worse!! I guided him and the class through how our union flag was made up, the children following each step carefully. The teacher was brilliant at explaining to the children how to draw each cross etc and we were both really pleased at the work produced.

The children were very confident with producing  their own flag and I helped them a little by bringing printed Great Crested Cranes that they could cut out to use if they wished. The only problem with the lesson, other than the relentless dust blowing everywhere, was that with all the crayons donated by schools & individuals in the UK there were very few of the two colours we needed red and yellow! Obviously the favourite colour! 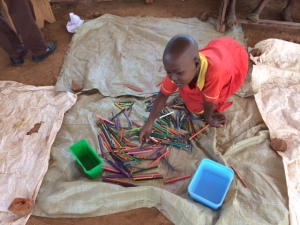 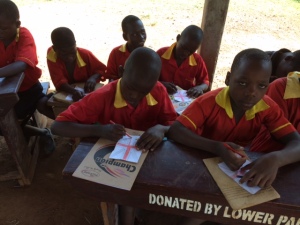 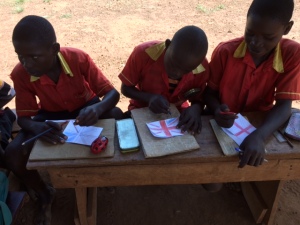 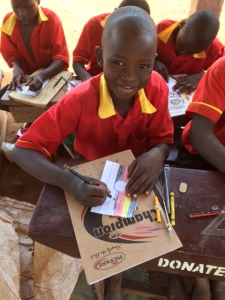 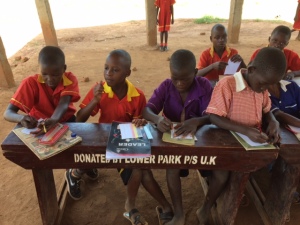 The school stapler had ‘gone missing ‘ recently so I had no stapler to attach flags to drinking straw ‘poles’ so, giving the teacher 10,000 Ugx (£2)he hopped on a passing boda, went to the trading centre and returned with said product and change! On a previous occasion I had forgotten to take a snack with me to school (the maize porridge everyone else has I just find unpalatable!), I mentioned the fact to Judith as I could feel my blood sugar lessening and the next thing I knew, Charles had gone and got me a bunch of bananas! 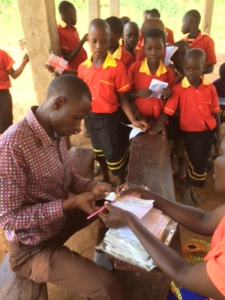 The lesson ended with photos and with singing the two national anthems, a risky venture which I’m sure those who’ve been following me for a while will remember!! I will try to forward you the video of the lovely singing of the children at a later date. My camera was too full to video my singing, what a shame!! When the teachers heard me their response was silent entrapment (I think, hope!) but they still keep asking when I will let them video it! 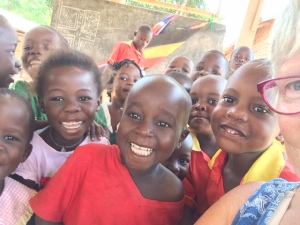 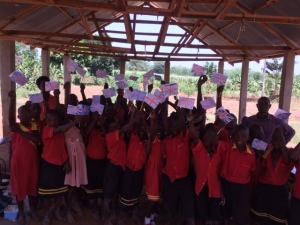 On my way home after school, I walked into the middle of the road to let this lady pass. She stopped suddenly and bending slightly at the knees offered me her hand of gratitude! In doing so her bike loaded with heavy bundle of wood for the cooking fire started to fall! I grabbed the bike and we heaved it back upright! I’m still not sure why she greeted me so profusely, was it because I made way to her whereas others might have forced her to reroute, or was she thanking me for my ‘good works ‘ as many do or was it that she just fancied shaking Mzungu hands. I will never know, but I got a great photo! 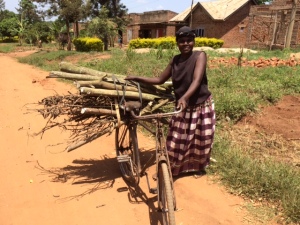