Well so far this visit to Uganda hasn’t been the best on record but I’m truly hoping that things improve soon! Basically I’ve been feeling rotten since the day I left home a week ago, seems longer. My cough turned worse as the week has gone on, I’ve lost weight (though not a bad thing!) and I’ve felt so exhausted from the minute I get up in the morning and a great deal of the day. I bought ‘over the counter’ antibiotics of which I took the last this morning and a horrible tasting cough syrup which I’m on my second bottle of. Two nights ago I thought I was going to cough my head right off but today I feel a lot better so here’s hoping! The improvement might be down to the ice cold Nile Beer I have just taken a liking to again as I had even gone off that!

I did manage to carry out the first mosquito net deliveries though but it was a struggle. The first 100 nets have gone to a very poor area of Jinja.

We visited many individual homes in the outlying areas but Godfrey, very sensibly, had organised for many of those receiving the nets to meet in the village square and it saved a lot of hard work for me and for the poor old pick-up!

Thank you to all those mentioned in the photos and many more whose nets I still have to deliver!

Our first port of call

And we get a nice greeting!

Godfrey is so good with children and they love him 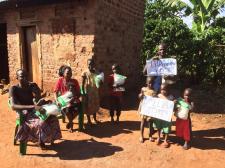 Thank you Emellia and Stephen

With a rather big family! 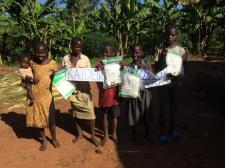 The track we followed at its widest

Then Mum turned up

Football made from a balloon covered in banana fibre and old plastic bags. It could bounce!

The structure on the left is a washing up stand, reminds me of guides! 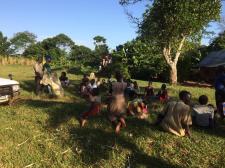 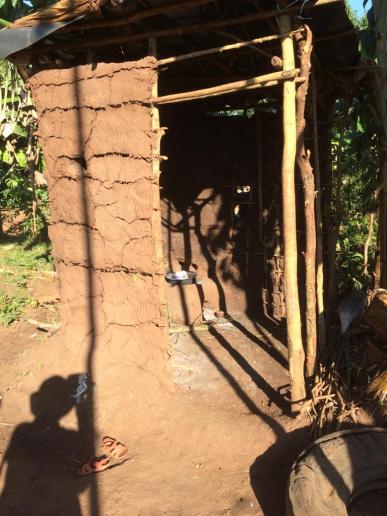 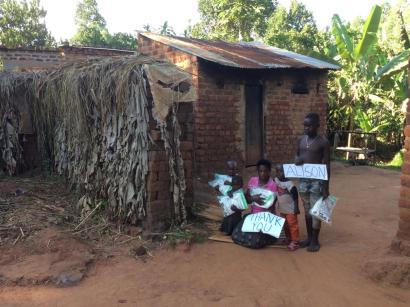 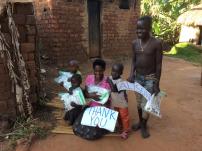 HAPPY BIRTHDAY ROY. These nets were bought as an alternative birthday gift, thank you Di! Note baby lying on left. 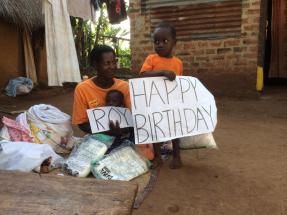 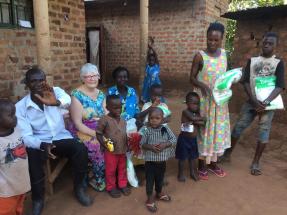 The last home we called at before the clan leader took us to the village square to meet many others.

Laying down on the job!!

Making good use of the pick-up we stopped to deliver three heavy bags of manure to Godfrey’s garden. I had no idea it had travelled in the back with two hundred nets and three young men!

It was a long walk to the fields and I realised when we got there it was foolish to have gone because it was a long walk back too! Not good for my declining energy levels! But I hate to miss anything!! 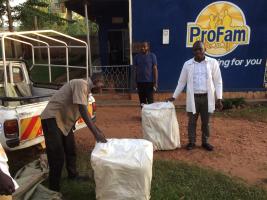 We delivered 100 nets to the hospital where Bosco works. With help we sponsored Bosco through his education. Bosco will give the nets to pregnant ladies who are very vulnerable to contracting malaria.