It’s Tuesday, I’ve been at a Innocents place since Sunday but my phone has been playing up and the internet very weak. I’ll catch up with the ‘missing ‘ days eventually!

This morning Paul and I travelled to his home village Kasozi arriving after a long and horrendously difficult journey, and it was me driving the pick-up! The recent weeks and weeks of flooding has caused the road to be almost impassable in many places, almost disappearing in places leaving many steep muddy ditches to navigate and often I thought the old pick-up (and the old driver!) were not going to make it! But, I had Paul sat beside me encouraging me and warning as we approached another bad deep ditch, and then out guiding where to go and which way to steer! I had no choice but to have faith in him! We had quite a few amused spectators too as only boda motorcycles, four-wheel drive and HGV usually attempt the journey!

By the time we reached the village my hands and arms ached from the strain of holding the wheel so tight!!! Every bone in my body has been madly shaken up!

All my belongings are covered in thick dust because I never thought to cover them. Fortunately the mosquito nets were still in their original packing so they should be fine.

Brother Bosco had beaten us here having travelling the road himself on a boda motorbike taxi and had been wondering if Mum Gerry would ever make it through! Soon after we arrived he showed me his new BP machine and asked if I’d like him to take my BP. I thought it would be very high after the stressful drive but he read 137/97, commenting that I was within range for my age! I don’t think that’s too bad but would love it confirmed daughter Nicola!

I forgot to mention at the start, that Innocent accompanied me from his home along the main Kamuli Road to where you have to branch off onto the track to to Kasozi where Paul net us. The traffic Police with their bright white uniforms (however do they keep them that way with all the dust?!) were out in force and stopped me! My heart missed a beat as I know from experience how ‘awkward’ they can be, and of course many are corrupt! A young one approached me so I calmly wound down the window and greeted him with a smile and Good morning Officer. He immediately pointed out I was not wearing a seatbelt. I explained that they didn’t work (like many parts of the pick-up!!) Then he asked to see my driving licence which fortunately I had somewhere in my bag? A more senior and rather larger officer then approached asking me the same questions. Relief, I found it along with my passport and a bit of money in case a bribe was needed! This officer took time looking at my licence, seeing quite fascinated by the large paper form (pre photo card etc!). He then commented on my age and asked if it was true that in the UK you can pass your test at 25 and not have to renew ever. I said yes, not until you reach 70 unless you’ve had lots of accidents. I passed my test in 1968 and would renew next year when I turn 70. I think his expression showed a mixture of surprise and appreciation! Whatever it was he then just asked me where I was going and for what what reason. I proudly stated that I was to deliver 200 mosquito nets to the village of Kasozi and that was it. He wished me well and waved me through! I hope if the police are there again on our return journey on Thursday he is there too!

Tuesday to be Continued!

Health check by Bosco with his new BP machine 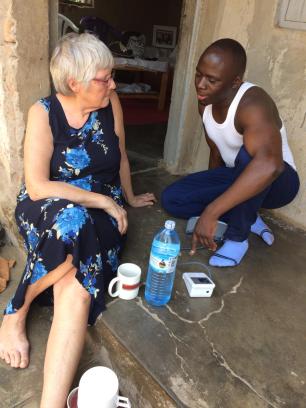 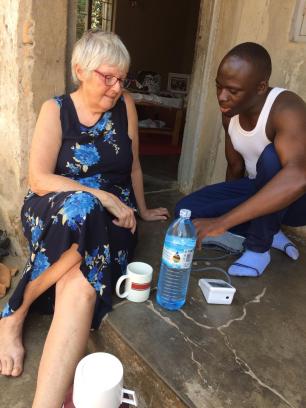 Is that releif on my face?

The Loans and Savings group

Nurse Bosco. It’s great to have a visiting health care nurse visiting the village and they all know Bosco

Emma and Paul prepare the nets

Handing out nets, some got more than one depending on their family size 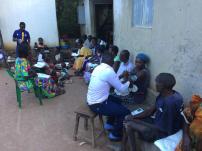 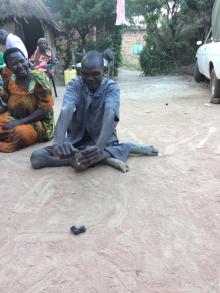 I gave disabled Emma one of my husbands shirts. He was overwhelmed, sooooo pleased and expressed himself so!

Emma declared that now he was my in-law as he was wearing my husbands shirt and then that everyone should now vote for him!

It had been a good but tiring day and I really needed to bathe! No bathroom here so Paul organised my water and a basin to stand in and with the help of my plastic jug I bought with me I bathed in the moonlight once again. Can’t beat it though something stung my foot!!

Recently it had been Paul’s 21st so I bought a cake and we had a wonderful family celebration. Paul was so surprised!

Emma decorated the cake with glowsticks as no electric light here

Family only visible by glow sticks! 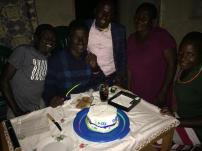 So strange coming way out in the countryside and finding the Internet is good! I’m making the most of it as you might have noticed!

Ok the boys have packed the pick-up and we heading even further into the countryside for another net delivery. Brother Mike has travelled early from Iganga to join us so plenty of help. See you later x

Wednesday morning. Ive just enjoyed a brilliant long sleep the most relaxed sleep I’ve had in ages. Secure in the knowledge that Paul was sleeping right outside my door, something that all these boys have done since I first stayed in their home starting with Alex over ten years ago when he not only slept nearby but also secured the door with an iron bar, a big boulder and his motorbike that we had travelled there on! It was fun and games when I needed a ‘shortcall’ in the middle of the night!! The boys promise Dad Norman (my hubby) that they will look after Mum Gerry and they do their best!

Already ladies are arriving for a health check from Bosco and it’s only 7.30. I’ve excused myself and walked down the garden to a good internet spot to write to you and have my breakfast. I can’t go without until mid morning like they do!

Once we had enjoyed Mum Monica’s delicious lunch work started. Firstly a Village Loans and Savings meeting was held at the home then Bosco, now a qualified nurse gave them and others a health check. Many of them qualified for mosquito nets so Paul and I gave them out to very grateful recipients. All these nets were bought with a kind donation from my sister Patsy. The sun was going down rapidly as we gave out the last nets. I created a lot of laughter as I kept going into my room and chasing a mother hen and her chicks out but still they returned time after time. Then Paul informed me that it was there home too!! Better than sleeping with a rat!

We’ll be heading further into the countryside tomorrow but Paul has arranged for people to gather in groups in several areas so the job should be much easier than last year with the added bonus of a free health check!