A very important member of my Ugandan family has suffered with sudden onset seizures for many years which was diagnosed as Epilepsy though a true diagnosis is very difficult to find here in Uganda, for a start patients are being examined in the Mental Health department and it is not a mental health problem!!

I have been horrified to see and hear how he and others have been treated even by some of their own family members! They are bullied, spat at, kicked, their belongings stolen, left to die wherever they fall, chased away from people cooking “you will poison our food!” The list is endless!

The people who make life so unbearable at times often are still following traditional beliefs that this type of affliction is caused by evil spirits and the only way you can be cured is to go to the witch doctor! Yes, they still exist here in Uganda and they have influence! Only a year or so ago the body of Charles’s young son was dug up to be used in witchcraft. Horrible horrible horrible!

Two years I decided that as in most cases lack of education was the reason why these beliefs still had such an influence and the only way to fight them was to educate the younger generation so I made a start! With the help of Judith (Innocents mum) interpreting and Charles having the most lifelike seizure in front of all the year 6&7s (I wish I could have captured the faces of his pupils!), we talked through what a seizure was, the most important facts being that it is not contagious and does not happen because of evil spirits! The children then did group dramas and we discussed the rights and wrongs of each. They were brilliant!

I asked these young people if they would be my ‘ambassadors’ and go back to their communities and ‘spread the word’. They not only agreed at the time but actually did as I asked as for many weeks afterwards Charles was getting many positive comments from parents and community leaders. On Parents Day at the end of the year he got a group of students to repeat the drama. And then last year at my leaving ‘assembly’ I was so pleased when they performed in front of me, my heart felt like bursting!

These lessons were a resounding success which has changed the attitude of the many of the local people and in doing so has made a profound difference to the life of my friend and many like him. I have to admit to feeling just a teeny weeny bit proud!

So two years later with new Year 6&7 pupils yesterday with the help once again of Judith and Charles, I repeated program, sending a new set of very enthusiastic ‘ambassadors’ out to spread the word.

BTW I returned from school with thick dust covering my clothes and legs having thrown (well almost!) myself into assisting the ‘patient’!!! Getting up from the ground had been a bit tricky too! Ha ha, all in a good cause!

In groups to work out dramas. Lots of giggling but also real good input from some students 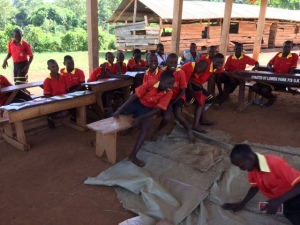 These were on a bus when they saw someone having a seizure! The ‘bus’ almost tipped over in their excitement to help!! 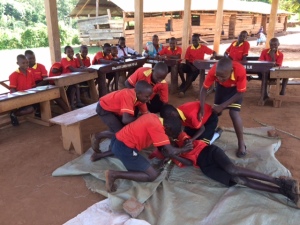 Smothering the patient with eagerness to help!! 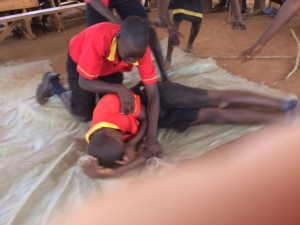 Some of the actors were so convincing like Alex who lives with Innocent, here the patient. 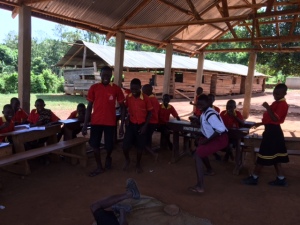 This group came in dancing before diving, quite literally into action! 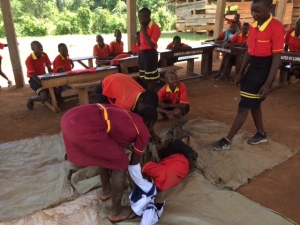